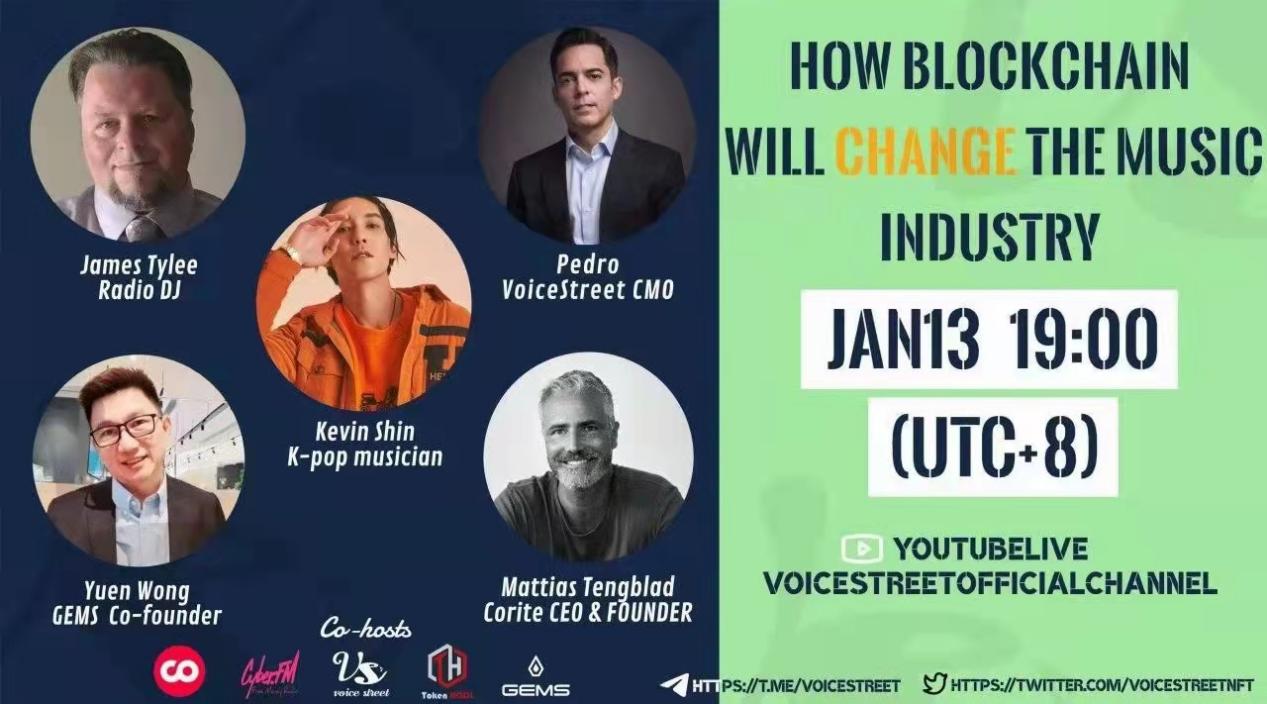 At 19:00SGT (UTC+8) on 13 January 2022, Voice Street hosted a live YouTube roundtable discussion on “How Blockchain will Change the Music Industry”. The roundtable discussion was moderated by James Tylee. Voice Street CMO Pedro, blockchain expert and senior investor Yuen Wong, Corite CEO and founder Mattias, Korean American singer and music producer Kevin Shin as participants to explain and discuss music NFT and related issues. The live on YouTube hit more than 4500 at peak concurrent and more than 1,000 chat messages. The recording on YouTube had already reached more than 34,000 views.

During the Live, James Tylee asked the guests their visions on NFT and the applications scenarios of NFT in the music industry. Voice Street CMO Pedro sees 2021 as the year for NFT, he said, “I think, for NFT, it’s only year one, and its self-evolving ecosystem there are so many more applications that well see in the future”. After that, the senior investor of Voice Street and Corite, Yuen Wong and Corite’s CEO Mattias both pointed out Voice Street’s and Corites’s application scenarios of NFT in the music industry. Music NFT is a better way for music industry, said by Yuen, “I am a big believer of Voice Street and Corite’s music NFTs”. Mattias followed up a bit by Yuen, he thought that: “in the 10-year perspective, we will have people with their favourite artists supporting them in buying their NFTs”.

As a musician in this live discussion, Kevin, who was asked about his IMO by James, he explained that IMO stands for Initial Music-Copyrights Offering, and his KVS token would be the first IMO in the world. “I believe in Voice Street that can help me to release my first IMO” said by Kevin, “I want to be the first one, once it works out, it’s gonna move fast, switch fast, and everybody’s gonna be on this, that’s how I foresee the future”. Mattias agreed with that, and he thought that music based blockchain companies should collaborate more for helping more musicians by using the fans economy.

In this live, no matter the peers in different blockchain companies, senior investor or musician, they all agree that music NFT is prospective, and believe that blockchain will change and it is changing the music industry.

James Tylee is radio DJ, Fintech/Wall St Executive, On Air Media Personality and streaming performance rights specialist. He is also committed to independent musician promotions. He is founder of Cyber.FM/Mainstream For The Underground and COO at Distributed Ledger Performance Rights Organization.

25+ years of experience at Global Investment Banks such as Credit Suisse, Merrill Lynch, UBS and Lehman Brothers, FinTech start-ups along with blockchain. Lived and worked in 4 continents, US and Mexico (North America), Spain and Switzerland (Europe), Argentina and Brazil (South America) and Asia. Graduated from the Haas School of Business at UC Berkeley.

Kevin Shin has a very high reputation in South Korea. He won the best newcomer award, best rap song nomination, best rap album award, best jazz/soul song nomination and many other big awards in South Korea. Internationally, he cooperated with superstars such as Chris Brown and Ty. Dolla Sign. He was also invited by the BURBERRY brand to participate in the production of endorsement theme songs. He has been highly recognized all over the world.

Yuen Wong is GEMS Co-founder, he has been serving many blockchain projects and has made significant contributions to the innovation of the cryptocurrency industry. He is currently the CEO of Labs Group, the managing partner of BitMart Exchange, and the director of NSAV Tech.

Mattias has over 20 years of unique management, business development and marketing experience from telecom and gaming to music and media. Industries that’s all been through radical transformations into digital.